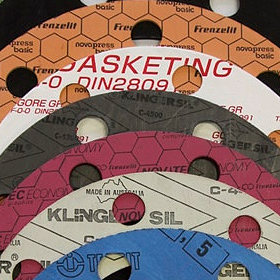 Let’s hone in on a specific case study, a threat profile that shows how overheating and extreme temperatures can affect gasket performance. Yes, in the long run, different mechanical sealing families are fabricated from advanced materials, and they’re designed to handle compressive forces while faithfully confining corrosive fluids, but what happens when that fluid is imbued with energy? What happens when there’s a powerful thermal component flowing inside the pipework?

The Effects of Heat

High temperatures are just part of the daily grind here. Hot water and hotter spouts of steam course down restricted channels. Like a near sentient elemental force, the heated fluid seemingly looks for an exit. The generated energy, locked inside the coursing medium, attacks the interspersed seals within the hot pipeline. The effects of the thermal discharge are catastrophic. They include swelling and hardening, material changes that corrupt structural integrity. Unless, the gaskets are built to tolerate such temperature extremes, failure is likely.

A gasket that’s equipped with an elastomeric function will seal readily and fill fine surface deformities when two flanges come together, but this mechanical asset degrades dramatically when the ring of sealing material is exposed to more thermal energy than it is rated to tolerate. The material begins to bake. It hardens and loses elasticity. The temperature seesaws, which then causes the hardening gasket to crack. Leaks are quick to take advantage of this new escape route. We’re looking at a brittleness transition that’s destined to cause leaks and subsequent performance plunges, for the closed system is suffering from a hemorrhaging event, a leak that will compromise the formerly pressure-secured pipework.

Much of what’s been covered could be considered a generalization. Make no mistake, thermal energy is destructive when not contained properly, but the effects differ according to the materials used in each system. Certain gaskets use thermoset materials but others opt instead for a thermoplastic core. Setting materials tend to shrink and harden, so they crack. Plastic-like variants, on the other hand, melt and deform. Creep and relaxed fits generally prosper when the material deforms, so the tight flange seal loosens. Again, a nasty leak is likely and system performance losses are an unavoidable result of this material slimming effect.

Select strong engineering plastics and metal-reinforced products to avoid performance-debilitating events. Thermally capable plastics and deformation-resistant alloys don’t contract or expand, don’t harden or become brittle, and they will always stay the course, no matter how hot the situation becomes. 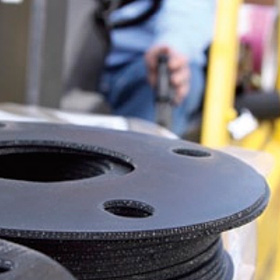 Gaskets are among the hardiest of products, so why not reuse an old one if it’s doing nothing else? It’s a tempting proposition, especially since these seals are fabricated from indefatigable materials. But doesn’t it make more sense to spend a few dollars on a replacement? The answer to that important question isn’t quite as clear-cut as you’d suppose, and here’s why.

If a previously used gasket still appears functional, the product could very well be pressed back into service. The material on this hypothetical seal is dimensionally unaltered and physically undamaged, so why shouldn’t it be inserted between two new mating surfaces? If it’s still compressible and still retains its original thickness, then reuse is possible but not certain.

Reliability ranks just as highly as usability as a determining factor, but there’s no real way of assuring this condition. The component looks as structurally viable as ever. It compresses and seats flawlessly, but looks can be deceiving. High temperatures may have adversely influenced the material, weakened the fabric until it no longer satisfies its original product specs. On the other hand, if the previous joint didn’t experience intense thermal spikes or encounter chemically reactive substances, then there’s every chance it will work according to its original design specifications. In the end, we’re looking at a judgment call.

Resolve the matter by playing devil’s advocate for the day. In taking on both sides of this debate, you compare the benefits associated with both options. In the reuse corner, this economical solution is advocated when the product isn’t damaged or structurally altered. There’s no way to ensure structural viability, but a look at the original application does tilt the case in favour of reuse if high temperatures and caustic chemicals weren’t part of the processing setup. If the gasket is suspect, then replace it. Suspect products are those that have been used in abrasive environments, or they’re obviously damaged, swollen, or material-fatigued.

This is a subjective topic, but a healthy pinch of objectivity is helpful. Yes, reuse the gasket if it’s structurally intact, but also address the application domain question. Next, replace the part if fluid saturation problems are obvious. Then, as far as final recommendations go, gauge the quality of the seal while keeping a rein on subjective thinking. Act objectively, and make the final choice based on collected application data, an impartial evaluation that inspects every aspect of the potentially reusable gasket.